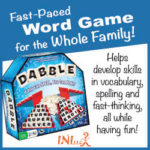 Like many other families, Thursday night is Game Night at our house. It is a familiar scene to most – Mom, Dad, Grandma, Grandpa, and the kids join around the kitchen table for a friendly board game. We are a vision of the perfect American family…but, only if you’re watching this scene on mute. If you turned up the volume you would hear my daughter yelling at her brother because he’s taking her turn; my father-in-law loudly insisting that my husband’s lack of hotels is clearly indicative of his lack of ambition in the real world; my mother trying to cheat by sneaking out of Jail before her turn; and my husband pointing to at me and yelling, “I thought this was supposed to be fun?” (Did I mention the puppy got into the game box that had been left on the floor and chewed the majority of the cards, money, and game pieces that weren’t being used?)

We all know how important it is to spend quality time with your family, but why must it be so difficult? Never fear! I have found the perfect solution to ease the chaos of Family Game Night – Dabble. Dabble is a board game best described by the subtitle on the box: “The Fast Thinking Word Game.” You will need anywhere from 2 – 4 players (or you can play in teams) and about 30 – 60 minutes for the game. Using 20 letter tiles picked from the provided bag, each player attempts to make 5 words: a 2-letter word, a 3-letter word, a 4-letter word, a 5-letter word, and a 6-letter word. There is an “hour glass” sand timer included to signal the end of each round, at which time players are allowed to change out their unused tiles for new tiles. The timer is turned over once the new tiles are selected and the next round begins. The “winner” of a round, having completed all 5 words, is rewarded by accumulating the points left in their opponents’ unused letter tiles. The first to reach 100 points wins the game.

Like many other beloved word games, Dabble is educational and helps expand vocabulary. But Dabble has qualities, unlike many other games, will make everyone happy on Family Game Night. First, it is amazingly easy to pick up – so your teenager won’t be bored listening to directions and your 10-year-old will get it without a lot of explanation. Second, everybody gets to play at once – this is my favorite feature because it means I am no longer playing referee…or chasing my mother back into Jail. Also, the rules are adaptable – there are several options suggested to delay ending the game and/or to make game play more difficult. Family Game Night chaos solved!

Dabble is being used in schools, by Adult English Language Learning programs, and by experienced word gamers. All the game pieces are well-made and if you use the bag included, the tiles won’t get lost (or chewed on by your puppy). And although I truly love this game, I feel obligated to warn you that it is surprisingly addictive. Thankfully, INI has developed virtual versions to feed my dependence on word games. Dabble is now available for your iPhone/iPad, Kindle Fire, Nook, Android, and it’s even on Facebook. JN