The Kingdom of Oceana – a Novel of Ancient Hawaii 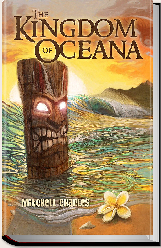 Two Study Guides:
(1) Literature, History and the Humanities, 21 pgs; soft 3-hole binder
This volume discusses the Hero’s Quest as developed by Joseph Campbell, the famous mythologist and allows the reader to follow the journey of Prince Ailani.

Also discussed from the book, are:
• Some history of the South Pacific as it relates to Hawaii and Hawaiian vocabulary
• Social issues, such as income disparity
• Literary devices, such as artistic license

This volume covers such topics as:
• the formation of the Hawaiian Islands
• the isolation of the Islands and how it impacted life there
• the impact of foreigners coming to Hawaii re disease and invasive animals
• the animals and plants that are indigenous to Hawaii
• the climate and how it affects the Life of people and the flora and fauna
• the Pacific Ocean and some of the facts about living on its shores

A portion of  all profits are donated to  The Oceanic Society — “saving the oceans and deepening connections between people and nature since 1969.”
================
By Emerson Sandow

Southern California and Hawaii have many things in common: Surfing and surfers, the Pacific Ocean shaping the consciousness of the people who live in both places and a carefree lifestyle because of the mild weather. What Hawaii alone has, is an exotic and ancient culture that is centuries old and was built around a naturist religion, much like those of the native people of the Americas, with animal spirit guides, human life force connected to the earth’s life force, powerful high priests and legendary kings and queens who ruled the islands of paradise along with great heroes who performed feats of bravery in times of need.

The ocean’s presence and power is one of the main characters of the story and in my estimation, Charles Mitchell has created a wonderfully intelligent and entertaining novel that teaches an overview of the ancient Hawaiian world while weaving a tale of a hero’s Quest a la Joseph Campbell.

The story revolves around two teenage brothers, royal princes, only one of whom can be destined to reign as king someday. They maintain a constant rivalry about virtually everything – racing, swimming, etc. The younger one of them is kind and more thoughtful than the older, who is a person of impulsive action, attracted to power and possessing a bullying mentality. They discover an abandoned and very ancient fortress that holds a magical Tiki mask of power. The older brother, Nahoa, is entranced with the Tiki mask and what its power can afford him. More fearful and thoughtful, the younger brother prefers to avoid the Tiki’s power and he follows a Hero’s Quest throughout the book, with help from his spirit animals and helpful humans, keeping true to his kind nature and refining it as he progresses. The story is simple, but archetypal in itself. You might want to read it aloud to your child so you can gain the pleasure of reading it as well!

The descriptions of the beautiful land of Hawaii are captivating in themselves. If you visit the website, www.kingdomofoceana.com, you will see photos of the places mentioned in the novel and gain insight into Mr. Mitchell’s inspirations in writing the book. If you want to give your child an excellent Unit Study topic, The Kingdom of Oceana is the perfect centerpiece for studying the South Pacific culture, geography, ocean, plants and animals. Aloha! Ω