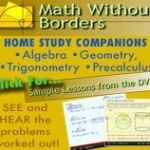 By David Chandler, Math Without Borders

pi is an important number in mathematics. It is also a difficult concept for students when it is first introduced.

To be an irrational number means it cannot be written down as a fraction or as a decimal number with a finite number of digits, or even as an infinitely repeating decimal number like 0.33333….  pi can theoretically be expressed, in decimal form, as an infinite, non-repeating decimal, but such a number cannot be written down or even fully computed. How can we use a number we cannot write down or even fully compute? This is a lot for a middle school student to try to comprehend.

pi has a very simple, clear, easy to comprehend definition:  pi is how many times farther it is to go around a circle than to go straight across it. In more mathematical terminology, it is the ratio of the circumference to the diameter of any circle. What is that ratio? It doesn’t work out exact in digits, but simple measurement shows that it is approximately 3.14.

Position a bicycle wheel with the tire stem at the bottom. Mark the starting point with chalk on the pavement.  Then roll the wheel until the tire stem comes to the bottom again and mark the ending point. That is a measurement of the circumference of the wheel. Measure the diameter of the wheel and divide. The result should come out very close to 3.14. Do the same with a soda can, a jar lid, or a circle of any other size. The ratio of circumference to diameter will always come out the same. That number is the same for any circle of any size.  We may not know all the digits of that number, but it is a definite number so we give it a name. It is called Pi, the Greek equivalent for the letter “p”.

I have created a series of three videos explaining pi with animated drawings, posted on YouTube with a playlist for all three, posted on my web site, www.mathwithoutborders.com. Go to the site, then go to the tab labeled Math Explorations, then look down the page to the Pi Movie.

The first video in the series presents the most important fundamental concept for understanding pi, the idea that there is a fixed ratio of circumference to diameter for every circle, no matter the size.  I do this by starting with a square, and showing that the distance around any square is exactly 4 times the distance across through the center.  I call this “the magic number” for all squares. If you trace a circle in each square, the circle cuts the corners off, so the “magic number” for circles must be a little less than 4.

I then show that the distance around a regular hexagon is always 3 times the distance across, measuring from opposite corners through the center. Therefore the “magic number” for regular hexagons is exactly 3. A circle traced around the outside of a hexagon would make it bulge outward a bit, so the “magic number” for a circle must be a little greater than 3.

The conclusion of the first video is that there is a fixed ratio of circumference to diameter, the “magic number,” for any circle, and that that number is somewhere between 3 and 4.  Even though we have only found one digit of the value of  pi, we have illustrated the meaning of pi.

Archimedes did something like this in the 3rd century, B.C. He started with two hexagons, one inscribed inside a circle and one circumscribed outside a circle. He then found a way to compute the new perimeter when the number of sides is doubled. From the perimeter of a 6-sided figure he was able to deduce the perimeter of a 12-sided figure and hence a closer approximation of pi. Applying the same method repeatedly, he was able to double the sides repeatedly, finding the perimeters of 24, then 48, then 96-sided figures. Based on his computations for 96-sided figures, he estimated the value of pi to a value equivalent to 3.14 in modern decimal notation.

If I were presenting pi to a middle-school clas, I would stop after the first video in the playlist and tell the story of Archimedes along the lines of what I have done above. By clarifying the meaning of pi and giving an indication of how one could approach the problem of finding its value by successive approximation, pi is demystified. That is really the goal at this stage.  Once pi is demystified, students can continue with the usual practice, finding circumferences from diameters, and vice versa.

The second and third videos in my playlist are more appropriate for a high school audience. They require familiarity with the Pythagorean Theorem, which also assumes familiarity with finding square roots of numbers.

The second and third videos illustrate how a spreadsheet can be used like a computer program to run repeated calculations. The details of the method shown here are somewhat simpler than the way Archimedes originally reasoned it out, but the general idea is the same. The method boils down to repeated application of the Pythagorean Theorem. Whereas Archimedes, working by hand was able to find the lengths of the sides of a 96-sided figure, we are able to set up a repetitive process on a computer spreadsheet which in just a few seconds can be extended to polygons with thousands of sides. Archimedes was able to derive pi to an accuracy equivalent to 3.14. We can apply our method, using a spreadsheet program on a computer, to get a value accurate to 15 digits!  This is far more than enough accuracy for most practical applications.  For most purposes pi is only needed to a few digits of accuracy.

We are not learning to calculate pi because we will need to know how to compute pi in practical applications.  Scientific calculators usually have a key that gives pi accurate to 8 or 10 digits with a single click. We are seeing how pi could be calculated to become familiar with this special number, in particular, and with the new category of irrational numbers in general. This “magic number” is not magic at all. It is a number we do not know how to compute exactly, so we compute it approximately, but the degree of approximation can be made as close as you like.

The most important things to be learned from this lesson are: